2018 has been declared European Year of Cultural Heritage by the European Union with these objectives: ” to encourage the sharing and appreciation of Europe’s cultural heritage, to raise awareness of our common history and values, and to reinforce a sense of belonging in a common European space”.

In 2018 we also celebrate the tenth anniversary of Simurg, the portal of the CSIC’s digitized collections that allows us to consult about 14,500 bibliographic or archival documents preserved in its libraries and which represents a magnificent example of the spirit that inspires this European initiative.

To celebrate, the Library of the School of Arab Studies will carry out throughout this year different activities related to its bibliographic and documentary heritage that we will announce to you.

The first one will consist of an exhibition, through Facebook, of some of the works of our library that can be consulted in Simurg. 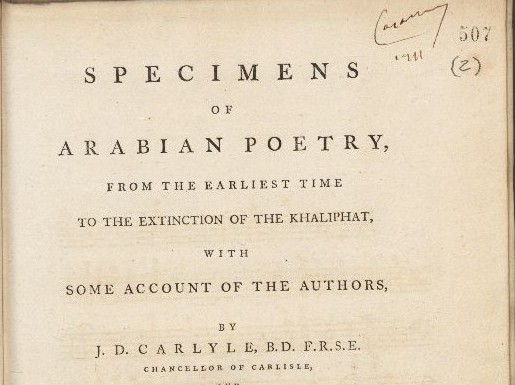 We begin with Specimens of Arabian poetry, from the earliest time to the extinction of the khaliphat, with some account of the authors. Cambridge: printed by John Burges printer to the University, 1796. (FA1-5-12)

Joseph Dacre Carlyle (1759-1804), professor of Arabic at the University of Cambridge, includes in his “Specimens of Arabian poetry” sixty Arabic poems with their respective translations into English. It is one of the first anthologies of Arabic poetry published in England, and Carlyle himself makes a statement of intent to warn his readers in the preface of the work: “If I have managed to convey to the English reader a general idea of ​​poetry Arab and at the same time to separate it from the misconceptions that many people harbor about it, I will consider my goal widely satisfied”

Some of the poems included in this collection are Andalusi, among them an epigram of the Cordovan poet Wallāda and the famous poem written in the prison of Agmāt (Morocco) for his daughters by al-Mu’tamid of Seville.

Carlyle also edited and translated into Latin in his “Rerum Aegyptiacarum Annales” the work of Ibn Tagrībirdī “Mawrid al-laṭāfa”, he worked on a critical edition of the Bible that he never finished and for which he compiled valuable Greek and Syriac manuscripts acquired in his travels and in an Arabic Bible that he would not complete either.

Link to the book at Simurg

The second work that we highlight in this virtual exhibition is that of the Swiss priest Jacques Mislin: The Holy Land: a pilgrimage to Jerusalem that, after being published in French and other languages, was published in Spanish in 1863, receiving numerous awards.
In it, Abbot Mislin describes the trips he had made in 1848 and 1856 in the Middle East, becoming a reference for other Spanish travelers who wanted to visit the holy places.
Pablo Martín Asuero, in his article for number 9 (June 2005) of the electronic journal of philological studies: Lebanon in texts in Spanish 1860-1910 (1) writes, referring to Mislin: “You can consider the French abbot as a romantic hero in an exotic territory when reading his descriptions about excursions through Mount Lebanon mounted on mule or the feasts in the convents; although his point of view is far from the hero tormented by the loss of his daughter as is Lamartine”.